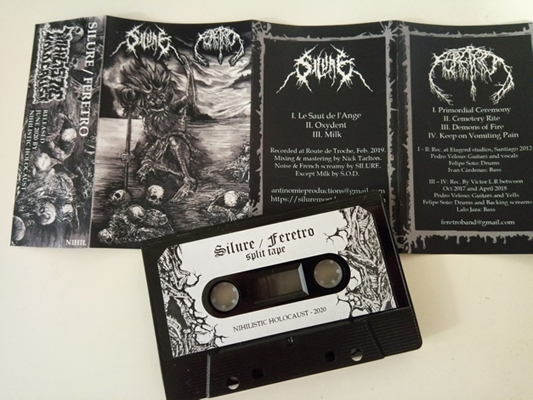 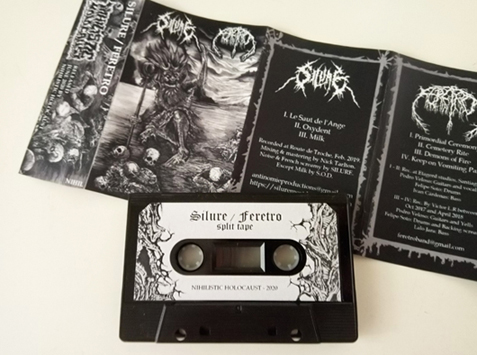 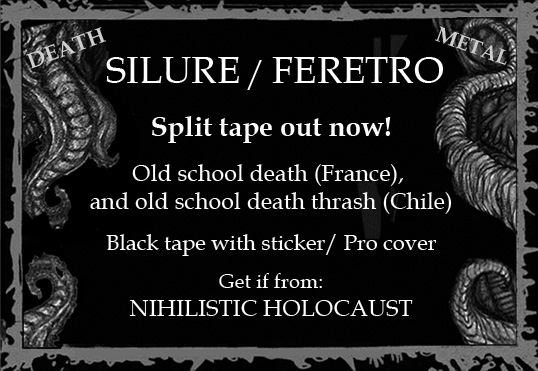 HEATHEN HORDES Webzine
French and Chilean death metal collide in this split release as Silure [Fra] and Feretro [Chi] are brought together for a cassette release through French label Nihilistic Holocaust.
Opening with four tracks of old school death metal savagery are Silure, who open proceedings with the rhythmic drums beats leading to to mid paced crushing riffs of 'Le Saut de L'ange', which quickly devolves into a punishing bombardment of writhing death metal fury. This track, far from being just an all out blitzkrieg instead swells like the sea during a storm, riffs rising and falling like an intake and release of breath. Of a more brutal nature, 'Oxydent' has a more straight to the point style featuring more abrasive vocal work and a powerful drumming display, whilst 'Milk' brings Silure's tenure to a close with a short, bass heavy blast of barbarity, like an armour plated killing machine against flesh and bone!
One thing I've always disliked about split releases is when the two bands have wildly different production quality. Wonderfully, as Feretro kick into 'Primordial Ceremony' it becomes quickly apparent that both bands have hit the same high standard! Feretro have a slower style that I prefer, kicking into high gear for short blasts and creating a truly blackened, menacing atmosphere. With a mixture of catchy rolling riffs combined with more urgent, technical licks, deep rumbling vocals and efficient, powerful displays on both bass and drums, Feretro are a class act and one whose twelve year tenure on the scene has clearly honed their talent as both musicians and song writers wonderfully. More of the same from 'Cemetery Rite' but with some excellent individual guitar work whilst 'Demons of Fire' starts with a far more frantic, relentless edge before sliding effortlessly into more slower, ominous sounding moods. Climaxing with the evil sounding 'Keep on Vomiting Pain', Fetetro bring to a close a very tidy little split release featuring two very good bands, both with their own style and high production values. The cassette release from Nihilistic Holocaust looks superb too and is a must own! [7.5 out of 10]
https://heathenhordeszine.blogspot.com/ ... rench.html


GRIZZLY BUTTS Webzine
The latest release from revered French metal scene supporters comes as a split cassette tape featuring two very limited releases from lesser known death metal bands. The first side is from French death metal solo project Silure which is spearheaded by M-Kha whom you should recognize as the man behind post-black metal band Aodon. His side of the split includes the three song ‘Route de Troche’ demo from 2019 showcasing a brutal, ranting form of death metal that sounds like it might lean towards Mithras a bit if it were polished and produced. The S.O.D. cover doesn’t do much for me but this is a solid enough introduction to Silure‘s sound, which leans into progressive feeling atmospherics as often as it does classic USDM heaviness.
The other side is a set of demo tracks originally compiled in 2018 by Chilean death metal band Feretro for a promotional tape which includes two songs from a 2012 promo demo and two more from 2017, it is essentially their best songs pre-‘Deathsolation’ EP in 2019. These guys are a bit more tightly wound and focused on pure garage-crashing old school death metal I’d liken their sound on the first half to early Sentenced or Therion, crushed-out riffs with some Autopsy-esque pace changes with fairly simple song structures otherwise. The second half is clearly five years removed from Feretro‘s beginnings where the render and the guitar work take a grand leap in quality. It is cool to see the evolution of the band over the years, and I love “Cemetery Rites”, but I was more inspired by the newer songs, they whip more ass and definitely made me want to grab their second EP (hit up Argentina-based Conjuro Records). Solid split tape between two great bands, hope to hear more from each in the future.
https://grizzlybutts.com/2020/06/24/req ... june-2020/


VOICES FROM THE DARKSIDE Webzine
This split tape joins SILURE, a French Black / Death Metal band (whose name is actually a type of catfish for some reason), and Chilean Deathsters FERETRO. SILURE’s side offers their 2019 EP (and only release before this tape), which had only been digitally available, under the title “Route De Troche”. Their total time doesn’t reach ten minutes, including two original songs and a surprising cover of S.O.D.’s ‘Milk’, which is not too far from the original, albeit rather more chaotic (the vocalist hardly ever follows the lyrics outside of the chorus and for the most just makes sounds up). The line-up includes M-Kha of atmospheric Black Metal band AODON. Truth is, I much prefer this band to AODON, even though I only have two original tracks here to judge. Still, from this material, SILURE is a fast-paced Death Metal massacre, with fast drums and permanent aggression, and vocals I have to love for two reasons. First their quality and second, the fact that they remind me a lot of AUTOPSY circa their debut. The guitar sound is aptly distorted and the riffs fit the chaos in a good way, as does the dirty but heavy production. The other side belongs to FERETRO from Chile, with a bit more name to them, having released several demos and EPs in the past dozen years, but equally raw and sepulchral. Their songs had also been previously available, being in this case the two tracks of their promo 2012 (released digitally) and two other songs from their Promo CD-R of 2018. There is a clear development between their earlier material and their later one, with the two final songs especially being great putrid Death Metal of very good quality, with raspy ripping vocals, vicious drumming and some impressive guitar work. Even the tape’s presentation is suitably oldschool, with a black and white illustration of some oriental looking demon with fallen dead around him. If you like old school, dirty, underground Death Metal this great tape is definitely for you.
https://www.voicesfromthedarkside.de/re ... e-feretro/
Underground tape label/ webzine/ Distro:
http://nihilistic-webzine-distro.fr
Haut
Répondre
5 messages • Page 1 sur 1