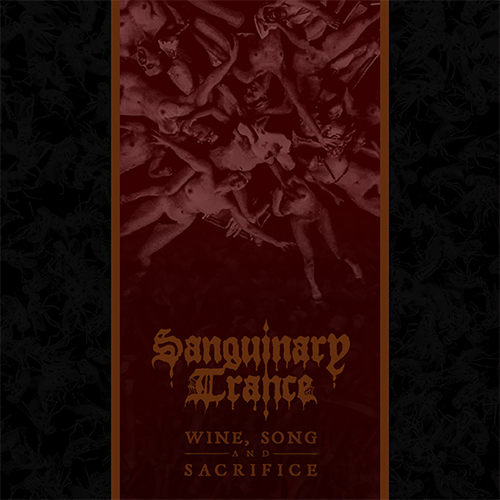 
"[...] Just as many spiritually charged, ecstatic and enthusiastic musicians exist within the sub-genre yet few in recent memory channel the head-flinging-backward daze induced by the Dionysian mysteries as Austrian black metal project Sanguinary Trance." - Grizzly Butts

"I hear strains of medieval music in the solemn but seething grandeur of the title track, which grows both increasingly mystical and increasingly savage as it unfolds, and the multi-faceted vocals are harrowing enough to raise goosebumps on the skin.“ - No Clean Singing

"Showing more promise in their first three tracks than many established acts can manage across several releases, ‘Wine, Song and Sacrifice’ imbues their raw-ish black assault with equal doses dissonant horror, Dionysian madness, vampiric melodrama and rhythmic tribal intoxication. The overall effect is a menacing and overwhelmingly sensual high that can be quite dizzying if it hits you just right [...]"
- Black Metal Daily

"‘Wine, Song and Sacrifice’ is a bloodstained love letter to the most iconic of black metal times, but with an unmistakably unique viewpoint on it. With some unforgettable moments that set your teeth on edge and make your hair stand on end, Sanguinary Trance are indeed trance invoking and the feelings it conjures are black magickal."
- The Killchain Blog

"Raw and dissonant, Sanguinary Trance’s debut EP Wine, Song and Sacrifice is a solid piece of black metal with a ritual touch and a 'classic' feel. The long title track is an impressively unfolding beast, backed by two shorter and furious finishers."
- Evening Of Light

"It’s extremely easy to get lost in their hypnotic music. Which by the way is a tightknit wall of purposely penetrating noise. I can only imagine what this might feel like to witness live. I could surmise that it would be nothing less than euphoric. Radiating such an intense atmosphere. Quite beautiful really."
- Autoeroticasphyxium Zine
Haut

Arson Cafe ranked "Wine, Song and Sacrifice" among the ten best EPs of 2018:

„A dramatic, chaotic and mournful start catches the listener’s attention immediately. Technically strong musically, combined with brutal vocals provides a level of chaotic energy that is actually very pleasing to listen to. Clashing vocal styles over the consistently chaotic feel provides another really favourable musical element. “Wine, Song and Sacrifice” continues to be consistently oddly melodic throughout this release while a raw feel adds another almost depressive aspect. Sanguinary Trance is technically tight as a whole; their dedication to their music is reflected in the continual technical aspects they display consistently.“
- Autoeroticasphyxium Zine (second review)

"The unique highlight of "Wine, Song and Sacrifice" is the opening title track. It is a thirteen-minute atmospheric piece with a few exclusive moments. If I had to compare it to someone, I would not be afraid to point out to compatriots Abigor in their golden era. The second track "Carvings" represents the more aggressive but still traditionalist face of Sanguinary Trance. Specially conceived is the final "The Dionysos Whip", which preserves the sound of the nineties, but with the disharmony and the gauntness typical of the much later development stages of the genre. However, as in the title track, the song improves impressively to make a one-second noose at the very end."
- Sicmaggot (via Google Translate)

„It is good to see (and hear) that the Austrian scene is still so vital and you do not have to confine yourself to the big and established acts in the genre. And despite the much too quiet sound (which I do not consider in the rating, since mix and mastering are otherwise well done) here is an EP that does not need to hide from their albums in any way, but shows some old master clearly what matters today: Passion and independence are the keywords that SANGUINARY TRANCE have spelled on their flags without a doubt. For my part, I am very confident that you should continue to keep an eye on this project in the future. RECOMMENDED! +++ 8/10 points“
- Black Salvation (via Google Translate)
Haut

"Wine, Song and Sacrifice is truly an EP to behold. Through three offerings it is incredibly varied and unique, each track bringing something different to the gnarled and chewed up blackened table. With ripping riffs, a greatly varied vocal delivery, machine gun drumming and an overall raw and powerful production, Wine, Song and Sacrifice is an excellent EP. This is an unmistakably superb and a very well rounded debut offering."
- Cadaver Garden
Haut

"If they had not told me that this was from 2018, I could easily guess that it is old material. And every time I hear it I can not stop thinking about Hirilorn, Sacrilegium or even the first Satyricon material; [...] A unique experience; an unparalleled journey of chaos and madness perfectly made through these three tracks that together tell a story of evil and secrecy.
6 stars of 6: A Masterpiece."
- Arkhon Blog (via Google Translate)
Haut

"Well bugger me sideways, there aren’t many EP’s that pack this much clout AND vision. All in all, a strong first offering from the fledgling outfit. Whatever visions Sanguinary Trance have witnessed in the twilight, one can only hope they will return soon. For now, allow Wine, Song And Sacrifice to consume you. It’s corrupting tendrils will bury deep into your flesh, ensuring you’ll be hitting repeat into the wee hours of the dreadful night. 8/10"
- Musipedia Of Metal
Haut

Episode #13 of Leviathan ZineCast features the title track of "Wine, Song and Sacrifice" in its entirety and a well-worded introduction to our music (starting at 21:04):

"“Wine, Song and Sacrifice” is an album where the maniac and hypnotizing notes are present all around it and that’s what makes it more insane even for the insane Black metal standards. [...] The epic and grad tittle track has lots of moments when you reallt wonder if the musicians know what they are doing due to the dissonances that appear to be out of tune, but that’s exactly the intention. Only a twisted and sick mind could ever imagine an album like this."
- Metal Addicts
Haut

"Each of the three tracks constitute a unique offering, bound together by a dense atmosphere and traditional black metal style. What then sets Sanguinary Trance apart is the drive and ability of the project to weave sparks of the baleful, grotesque, and sometimes mystical, into the energy of each track for a visceral listener experience. [...]
Sanguinary Trance has succeeded in crafting a fiery innovation of violence and fervor, heightened by unrelenting tangles of atmosphere and melody. Wine, Song, and Sacrifice establishes Sanguinary Trance as a name to watch out for – and has all the makings of a foundational predecessor to great and wicked works yet to come."
- Covenant Magazine
Haut

"Providing a unique mix of melodic black metal phrasing with a sense of chaos, this twenty-three-minute release leaves the listener off balance with its off-kilter character. The rhythm section lays down solid traditional blackness, but the guitars go off in unexpected directions while the vocalist's howls ensure that you're left grounded, yet left somewhat confused. Intriguing. [7]"
- The Mighty Decibel
Haut

"Wine, Song and Sacrifice" is now available on Spotify: 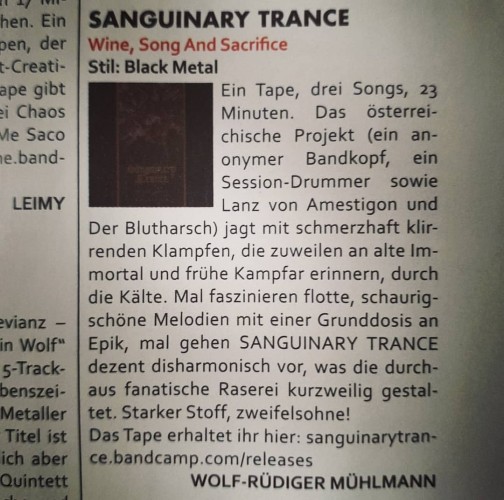 "The Austrian project chases through the cold with painfully clashing guitars, which sometimes remind of old Immortal and early Kampfar. Sometimes they mesmerize with fast-paced, scary-beautiful and slightly epic melodies, sometimes SANGUINARY TRANCE are subtly disharmonious, which keeps the quite fanatical frenzy entertaining. Strong stuff, no doubt about that!"
- Deaf Forever #29 (via Google Translate)
Haut

"This is a work that will certainly not be easy to listen to for those who love more polished sounds and cleaner compositions. However, in the chaos of a genre like black metal, Sanguinary Trance turns out to be a project that is able to show off immediately as a revelation, like a white fly in the deep swarm of black underground. This is a name that I will follow with great enthusiasm in the coming years! - 4,5/5 Points"
- Allaroundmetal (via Google Translate)
Haut

"Sanguinary Trance deliver an EP that does not deviate from the stylistic point of view, finding its most obvious references in the classic sound of the second wave of black metal, and therefore typically 90s, but also highlights the attempt made by the mastermind of the project to find his own "voice" within this sound. The results that are undoubtedly worthwhile of attention. - 80/100 Points"
- Insane Voices Labirynth (via Google Translate)
Haut 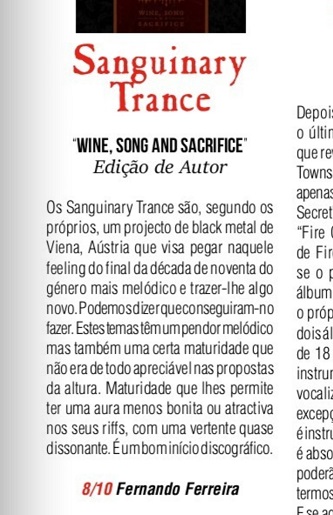 "Sanguinary Trance [...] aims to take that feeling of the late nineties of the most melodic genre and bring it something new. We can say that they did it. These themes have a melodic bent but also a certain maturity that was not at all appreciable in the proposals of the time. Maturity that allows them to have a less beautiful or attractive aura in their riffs, with an almost dissonant strand. - 8/10"
- World of Metal #29 (via Google Translate)
Haut

"There is an almost priestly commitment, an almost ritualistic appearance in the concept of the music and lyrics being presented. This is far from something sacred but its exact opposite - the ritual tones of hell, the exploitation of sins and sinful thoughts and actions and some higher state of consciousness is something this music evokes. A worthwhile and interesting debut, stronger than the releases of some established bands in 2018."
- Ciklonizacija (via Google Translate)

"The music grows in energy, gradually building up its frenetic schizophrenia while maintaining an almost orchestral feel to it with distinct moments. [...] It’s a harrowingly driven and bloody affair that is an insight into the mind of the maddening."
- Metal Noise

"I'm thrilled with this 3 track EP, which has rekindled my love for the Black Metal underground, and will keep Sanguinary Trance on my note. Both sound and style have completely convinced me!"
- Waldhalla (via Google Translate)
Haut
Répondre
17 messages • Page 1 sur 1